The past few days we’ve built the bridge to balance together. We’ve laid down the foundation for your mind, body, and soul.

Now is the time to walk across to your potential, dreams, and purpose.

You’ll have to start making sacrifices, but you really can have it all, but you can’t do everything.

You have to start letting go of control and perfectionism. In other words, you have to learn how to develop balance, and that’s exactly what we’re going to talk about today.

So, this is what happened for me on our show, Extreme Weight Loss. So, for five years, I was a taker of opportunities because I knew what I wanted, and I was well aware that this overload of opportunities was exactly how I was going to get there.

Now, I’ve got to be honest: The average side of me was scared to death, and I wanted to turn down most of these opportunities that forced me to grow and forced me to be uncomfortable, but the other side of me, well, I wanted to maximize the power of living an “and” life. I wanted something bigger. I wanted better. I didn’t want to be average. Now, at first I was zero part of the show on camera, but I was running all the guts of it behind the scenes.

I mean, one that really rang true for me is, “What if the people in my life think I’m silly because I’m pursuing dreams and I’m trying to do something great?” I was so scared of people thinking I thought I was better than them.

Now I love, I love this quote from Marianne Williamson. It encompassed and really gave me the motivation when I needed it most. It gave me assurance that I was doing what was right when I was pursuing my dreams and it goes like this:

“Our deepest fear is not that we are inadequate. Our deepest fear is that we are powerful beyond measure. It is our light, not our darkness that frightens us. We ask ourselves, who am I to be brilliant, gorgeous, talented, fabulous. Actually, who are you not to be? You are a child of God. Your playing small does not serve the world. (I get super emotional during this quote). There is nothing enlightened about shrinking so that other people won’t feel insecure around you. We are all meant to shine as children do. We were born to make manifest the glory of God that is within each of us. It is not just in some of us, it is in everyone. And as we let our own light shine, we unconsciously give other people permission to do the same. As we are liberated from our own fear, our presence automatically liberates others.” 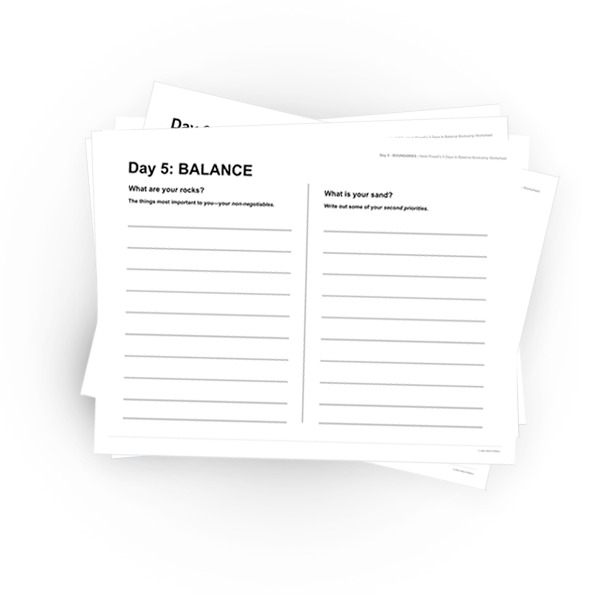 Identify your non-negotiables. Figure out what your rocks are first and then all the other things that make up your sand.

What are your rocks? The things that are most important to you. Your TOP priorities.

Now what makes up your sand? Your second priorities.

Here is the complete schedule.

Bonus points: Repeat today’s affirmation to yourself over and over as you complete your 5-minute routine!

This combination of a mental shift and physical activity is a truly holistic approach that will really make these ideas stick for you.

‍Today’s workout: Alright. I think you need to pat yourself on the back, give yourself a huge round of applause because you have officially made it to day five of my five-day challenge!

And I don’t even need to ask you.

I know you’re sitting there right now feeling so much better about who you are and what you can accomplish. And honestly, the sky is the limit from here.

I promise, whatever plan you follow next, it’s going to take you to an amazing next level, and before you know it, you’re going to be doing that triathlon that you always wanted to do.

Or maybe you’re going to be running around with your kids more than you ever thought you could.

Maybe you are going to be up on stage in a bikini doing a very first bodybuilding competition.

Whatever it is, I promise you, it’s completely possible for you. And, you know, you’re showing yourself that you are capable right now.

Today is actually one of my very favorite workouts to do at home.

The best part of this is you can do this whether kids are running around you or not. And the kids love to take part in this.

So, this is something I call tabata. Have you ever heard of tabata?

Tabata is very simple. And it’s only four minutes. So I’m adding on an extra minute of something else. I’ll explain it in a minute.

So, today we’re going to pick one movement.

And I know you are sitting there thinking, really? Twenty seconds of a move is going to get me?

I promise you, by round four, you’ll be like, “Oh my gosh, I still have four more rounds of this to go.”

It is going to be the best total body workout you’ve ever gotten in your life in four minutes. I can promise you that.

So, the move today, don’t kill me, actually just love me, because you will thank me later…

And I hesitate saying that because I don’t want you to freak out.

Most people hear the word burpee, and they immediately want to turn the video off, run around the corner, and never hear from me again.

But when you do it, and you see how simple a burpee is, and you realize that anyone can do a burpee, not just elite athletes. Anyone can. You’ll start to appreciate the athlete within you.

So, to perform a burpee.

I’m going to go ahead and demonstrate an advanced burpee for you right now.

A burpee is essentially getting down in a push up position, performing a push up, hopping up to a squat position, and then jumping and clapping above your head.

I know it sounds like a lot, but it’s really cool to take something that someone is so scared of.

I mean, can you imagine a 600 pound person when we tell him, “Hey, we are going to do seven minutes of burpees with you.”
They freak out!

Yeah, they are not doing as many burpees, and they might not be doing the same modification of a burpee, but they are still doing it.

And they are pushing themselves to their limit and beyond. And at the end of their workout, they always feel like a champ.

And I know you can conquer.

And I know you are going to feel like a million bucks when you complete it.

So, just to recap how it works: I want you to go find, either get your stop watch, or you can download a free tabata timer on any one of your smartphones.

Then 20 seconds of burpees, then rest for 10 seconds. Again, repeat that for a total of eight rounds.

When you are done with that, I want you to just simply jog or march in place for one full minute because, like I’ve said, it is about these baby commitments.

We committed to five minutes a day.

We didn’t commit to four minutes a day, we committed to five.

So, I want you to fill that last minute with one minute of you just jogging or marching in place, patting yourself on the back if you want to, and just realizing the amazing champ and athlete that you actually are.

So cool, I can’t wait for you to complete this workout.