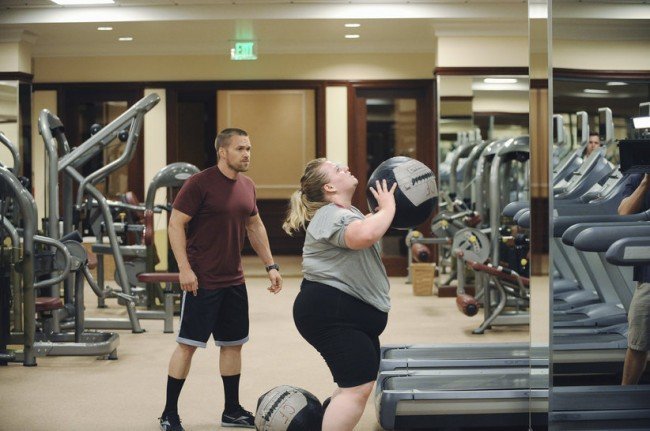 On?Extreme Weight Loss?(ABC) Ashley, the episode which will air on August 20, 2013, Ashley Hylton carries with her more of a burden than just her extra weight which she desires to lose on the show ? she also carries a huge amount of guilt over the loss of her daughter, who died when she went into early labor.

Chris Powell is surprised when he selects Ashley for the year-long weight loss program that her husband, Jason, also wants to participate and jumps on board, making this?Extreme Weight Loss?episode as much about him as it is about her.

Chris Powell has all of the people who are selected lose their weight in four 90-day phases in their quest to lose at least half of their initial body weight so that they can qualify for skin surgery to remove the extra folds of skin that are the result of losing so much weight.

Chris also likes to provide the participants extra added incentives if they meet their weight goal for each phase, like cruises or skiing trips to Colorado.

In Ashley?s case, for meeting her first 90-day weight loss goal, Chris sets up?a special workout with the gold medal-winning U.S. Olympic Softball team and Ashley?s favorite player, Jenny Finch. ?This should be a great moment of the episode, seeing how Ashley reacts when she meets Jenny, and also seeing them doing a workout together.

Since Ashley is also an aspiring photographer, as well as enjoying softball, Chris arranges to send Ashley and her husband, Jason, to Peru at the six-month mark of her weight loss journey.

While in Peru, she and Jason hike up to the heights where the ancient city of Machu Pichu is located, for the ultimate photo shoot. I am definitely looking forward to seeing how well she likes visiting Machu Pichu, which is one of the places on the bucket lists of many people as a place they?d like to see before they kick the bucket or die.

Chris, being a transformational coach as well as the co-host of the show, along with his wife, Heidi, wants the participants on?Extreme Weight Loss?to not only transform themselves physically by losing weight, but to also transform themselves internally, and get rid of their extra psychological baggage.

To help Ashley get over her sense of guilt that she was responsible for her baby?s death and to move on with her life, Chris encourages the family to have a memorial service for her as part of the healing.